Nara Native Turf is a new variety of Zoysia grass which has been bred in Australia. While most Zoysia lawn types are not originally native Australian grass varieties, the Nara strain has been developed here, and as such is often referred to as Native Nara Turf.

Nara is a very low maintenance lawn, it requires only low fertiliser usage, it can survive and stay green under heat and drought, and can go for long periods without mowing – without getting out of control.

Equally, Nara can be given greater care and kept to a higher standard with a little more fertiliser and water and with more regular mowing.

With these factors in mind, Nara really is a low care lawn, is able to survive abuse and neglect, has low aggressive and invasive properties, and may be a perfect choice for many people who simply have little time to look after a lawn. 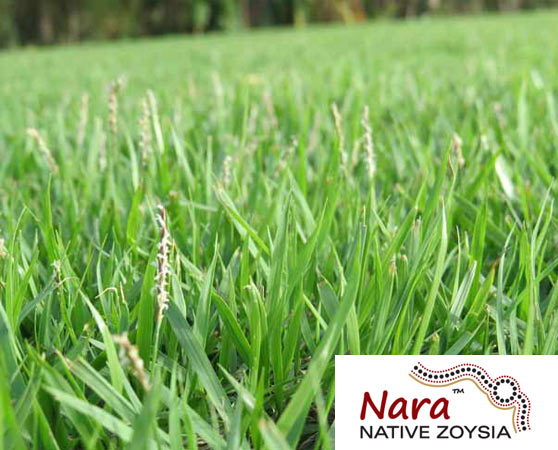 Lawn Diseases
Nara has very good resistance to most lawn diseases, and any problems can usually be easily controlled using the same products as those used on Couch lawns.

Weed Control
Weed infestations can be easily treated with most available herbicides, with Nara having excellent tolerance to weed sprays which is equal to Couch. This includes the ability to spray for Paspalum, which is a major problem with lawn varieties such as Buffalo.

Pest Control
Once again, Nara is an all-round good choice of lawn type for pest control. Being a Zoysia, Nara has excellent natural resistance to most lawn pests such as lawn grub, and will easily tolerate most pest control products.

Lawn Mowing
Nara will mow well at both lower and higher lawn mowing settings depending on the preference of the homeowner. It requires less mowing than Buffalo, Couch and Kikuyu, and will not thatch up like any of the grasses already mentioned.

While Nara does grow a little faster than Empire (Zoysia japonica), it can be left un-mowed for a long period of time without ever becoming ugly or overgrown like other lawn types can, such as Kikuyu or Couch. In fact, a Nara lawn can be left neglected for a long period, and then mowed with very little to no scalping from mowing.

Lawn Fertilising
Nara, like it’s cousin Empire (Zoysia japonica), can cope very well with low fertilising regimes. So if you’re the type of person who doesn’t pay a lot of attention to fertilising the lawn, then Nara is a consideration of lawn type. Equally, Nara can be maintained to a more manicured standard with a few light applications of lawn fertiliser each year

Recent trials by Australian Zoysia experts have shown that all Zoysia, including Nara Native Turf will gain great results in retaining superior Winter colour when the homeowner applies a good application of fertiliser to the lawn in mid to late Autumn.

Salt and Drought Tolerance
Nara has excellent salt tolerance, so in this respect, it is an excellent choice for coastal regions where other grasses simply cannot cope with excessive amounts of salt in the environment.

Also, if the region you live in often experiences high water restrictions or drought which result in the killing off of many lawn types in your neighbourhood, then Nara will be an excellent turf to consider, as it will cope and recover very well in these conditions.

Differences Between Nara and Empire

Empire Turf is a Zoysia grass based on the highly popular and excellent strain Zoysia japonica. Whereas Nara has been developed from a Zoysia strain found only in Australia, called Zoysia Macrantha. In the past, Zoysia macranthra has not been highly regarded and always performed poorly when compared to the Zoysia japonica strain, and as such was never really adopted as a turf type – which was solely because no-one in Australia had the fortitude to actually spend time “breeding turf“, as most lawns developed in Australia were often “found” and not bred at all.

That was until a real turf and plant breeder changed all of that forever!

After 10 years of development, Todd Layt of Ozbreed put in all the hard yards of true turf development and developed a new lawn from Zoysia Macrantha which equals or betters many other turf types being sold in Australia today for quality, durability, low maintenance and beauty.

For those who have a true understanding of grasses in Australia, all realise that Nara really is something special and unique, as a lawn of very high quality, while being Australia’s first and only native lawn.