Compared to ground covers and ornamental plants, pavers and decorative gravels, turf is the most cost effective surface. When building a new house the outside is usually the last task. Turf is the lowest cost way to landscape a home, and not break the budget. The recent economic downturn has seen the sale of turf boom. Why? It is the lowest cost choice for home owners and landscapers to cover the ground. So if you are running out of money to finish landscaping around your home, consider using more turf.

Any Landscape professional knows that the cost of installed turf is far less than pavers, concrete, plastic fake grass, tiles and other hard surfaces. Decorative gravel installed correctly with a compacted base of construction grade gravel, weed mat, and 50mm of decorative gravel on top was estimated to be triple as expensive at low end estimates compared to turf and twice as expensive at high end estimates compared to turf installed correctly.

If large areas are mass planted with tubes, the low end estimate for plants was $14.10 per square metre, and the high end was $47.60. When it comes to the lowest cost general landscape product it is clearly turf. Naturally, turf cannot be the only product used, as it is limited by use needs, functionality and cultural conditions, but if cost savings are needed or desired, consider increasing the amount of turf around your home.

In a Department of Primary Industry and Horticulture Australia Study, Sapphire® turf rated the best form of Buffalo for shade. Zoysia generally handles around 50% shade, with Couch and Kikuyu coping with approximately 15% shade. If the site is more than 70% shade, low growing Liriope planted between stepping stones makes a great alternative to turf. Isabella® Liriope muscari ‘LIRF’ PBR is a fast spreading low growing Liriope that can be mown once per year, and it works in very heavy shade or full sun.

Maintenance can be another limiting factor. Some clients may not want to mow much. Gardens and other alternatives can help here, but so can the choice of low input turf. Zoysia needs far less mowing and edging than other turf types. Empire™ Zoysia also needs very little fertiliser. For large commercial amenity areas, or large residential or acreage properties using Zoysia turf like Empire™ and Nara™ native turf can save huge sums in maintenance. 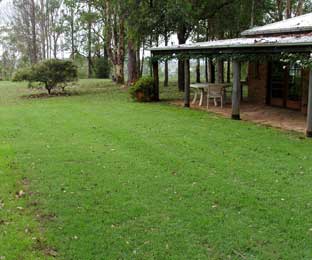 Dogs can be really hard on turf. If it is a sunny aspect, Kikuyu and its quick regrowth works best. Here the extra mowing works in your favour. A new Kikuyu marketed under the trade name of Kenda® has more Rhizomes, allowing it to far better withstand the traffic of dogs. For shady spots Sapphire® Buffalo ‘B12’ PBR is best.

For erosion control on slopes or in drainage channels, Zoysia turf is easily the best choice. It needs far less mowing than other types, but has also been shown to strengthen the soil far more than Couch or Kikuyu. Nara™ Native turf in a recent study, took 15kg more in force to tear securing pegs through it than couch. This means it can be secured on slopes and high flow areas far better than couch and Kikuyu without the use of netting.

Functionality and personal preference obviously limits the appropriateness of using turf in some situations. Entertainment areas for example with fixed furniture, or under patios, or high traffic pathways or next to fences or walls where screening plants are needed. One way to have the budget to spend more on these more costly areas is to maximise the use of turf around the landscape. Many people naturally desire gardens, and the best way to make turf more garden friendly is to use turf types that need less edging, namely Buffalo and Zoysia.

Turf is actually carbon positive, meaning that with modern lawn mowers, emissions are less than the carbon sequestration of turf. There are many tips that help maintain lawn more efficiently. Edging turf on very large gardens, can actually be done with Fusillade. As long as the plants are not true grasses like Poa or Pennisetum (Lomandra and Liriope are OK) then Fusilade will kill the grass that invades into gardens without harming plants. Sempra does a good job taking out Nutgrass and other sedges from lawns.

Turf farmers use pre-emergents to stop weeds from coming up in lawns. Did you know Prolan or Embargo (ORYZALIN) can be used on turf and gardens? Just before spring each year is a good time to treat all the gardens and turf with this product. I find the higher label rate works best. At the lower rates broadleaf weeds do not seem to be controlled. The use of pre-emergents can save lots of time and money. They generally are best used by people on acreage, and can be purchased from Elders or Globe in larger bags.

Aesthetics of turf can be enhanced, and maintenance costs can be saved by using the right type of fertiliser at the right times of year. For Kikuyu, Buffalo and Zoysia the most important time of the year to fertilise is autumn and winter. If applied at these times winter colour is greatly improved. Couch is not improved by winter fertilising, unless you are in the tropics. Mid spring is the other important time to fertilise. Make sure you use slow release fertiliser.

Using more turf in your landscape can greatly reduce the overall cost of the project. Using larger areas of turf can allow you to spend more on the smaller entertainment areas.